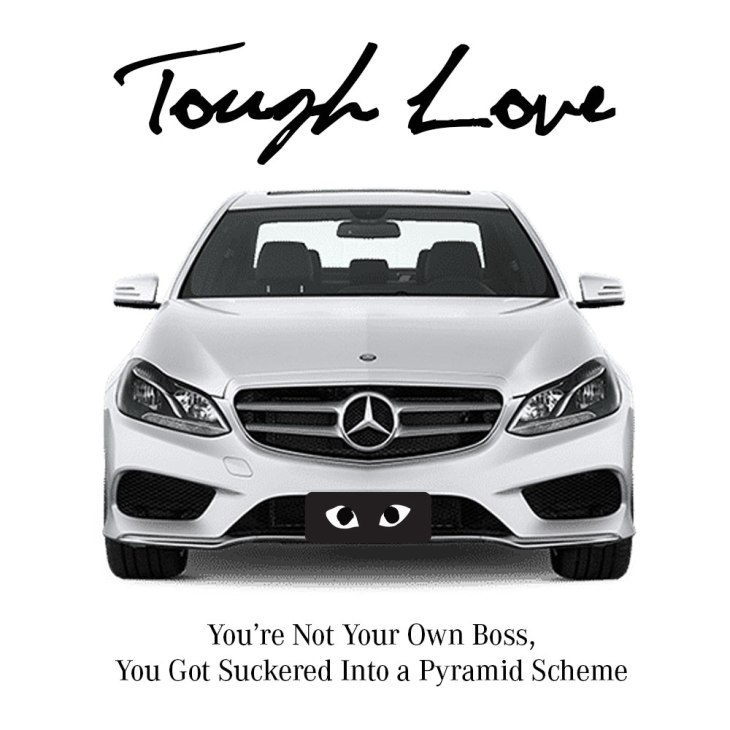 Hey Girl! (Stars as eyes emoji) I reached out because I think you’d be a perfect person for reading this blog! (heart eyes emoji)

The irony isn’t lost to me that a blog/clothing line (is it a blog or a clothing line?) whose logo is a pyramid is shitting on the concept of a pyramid scheme. Sorry, “MLM”, rather.

Multi-level marketing (legalese for legal pyramid scheme) is a company in which distributors purchase stock from the company and take a cut of profits once products are re-sold. They also make a percentage of sales from distributors they directly recruit to sell the company’s product. They also make an even larger percentage of anyone that knows them highly annoyed with their incessant promotion of subpar lifestyle products and bizarre recruiting tactics.

Primerica? Trash. Amway Global? TRASH. Herbalife? Trash. Arbonne? Trash. Avon? Probably trash idk tho I think it got left in the dust when Xanga was still a thing. In 2025 when they release some keto mushroom moose-cum algae age-defying coconut oil supplement, it’ll be trash, too.

It’s always somebody who was mean in middle school that suddenly wants to reconnect and recruit you into the Direct Sales division in the Army of Online Annoyances.

Imagine getting suckered into a pyramid scheme and now all of your family and friends have to pay for it.

My impressionable, barely-legal, 18-year-old self almost got roped into Amway Global back in the day by my cousin’s ex-boyfriend and luckily I wasn’t gullible enough to listen to this fucking dipshit moron or his dicey, used car salesman-looking friend taking lunch break meetings with me from his bank job, trying to tell me I could make six figures selling cashews and water treatment systems to everyone I could recruit in my phone contacts. (Hey Mateo, if you’re reading this, the pH level or electrons in a water bottle doesn’t impact your balance if you’re holding it and standing on one leg, you tiny dweeb.) That was understandably not relatable to most of you I hope, I’ve just never seen the dude again, not sure when else I could talk about it and had to get it off of my chest.

Anyway, frankly I just think you’re a shitty human being to try to recruit people who care about you to meet a quota for companies that live off of distributor acquisitions and not product sales.

Pro-tip: Don’t trust anyone who can’t explain to you over the phone what they want to sell you, whether it be a career path or some type of insurance venture. They want you to commit to a sit-down to make it more likely you don’t pass on their offer as psychologically you’ve already committed time.

Selling can be tough and folks who are great at new client acquisition should be applauded, however, there’s a line of where you go from being viewed as skilled and being a pest. There’s a difference between a polite sales pitch at the door and being bombarded with odd compliments in the produce section of the grocery store, followed by them asking what you do for a living. Anybody trying to make too much eye contact with you in the grocery store either wants to kill you, fuck you or sell you something.

Anyway, I’m out, though.

Your high school crush got a VSCO app and a backseat-of-a-mid-size-sedan-load’s worth of vitamin supplements and now she’s a Girl Boss. Also, she hasn’t cleaned it in eight months.

Your high school crush keeps posting their weight loss journey from some MLM diet pills but fails to note their rumored cocaine addiction. You truly to hate to see it.

P.S. If you wanted to embarrass your family online so badly for a white Mercedes, you could’ve made an OnlyFans.